Your Guide to the Cloud

Everything the weatherman can't teach you about clouds 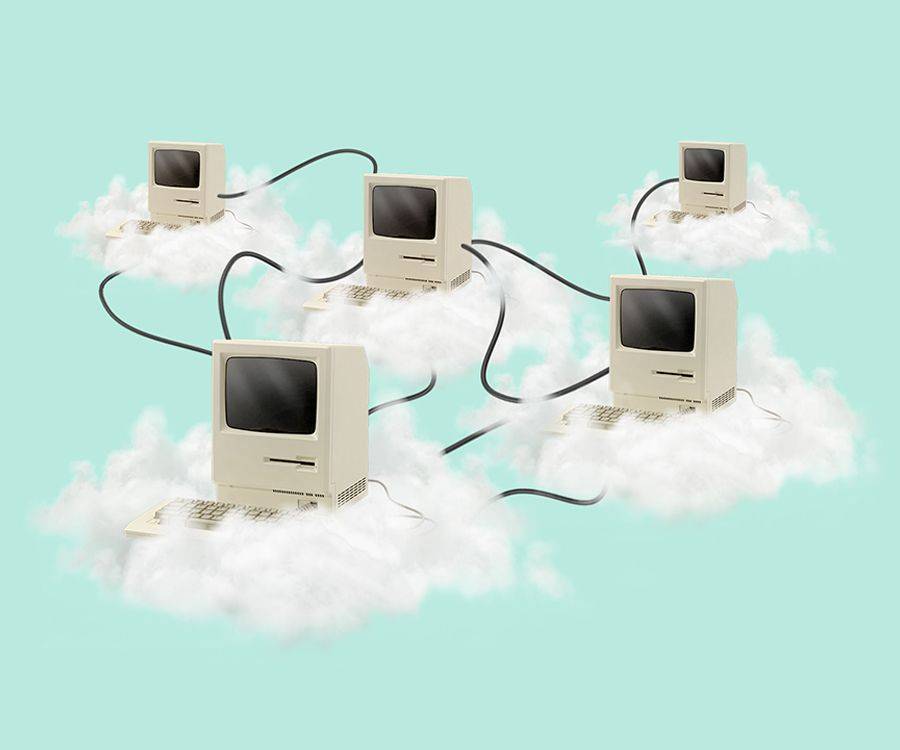 We tend to think of the internet as a nebulous, abstract thing—a connected network with no concrete ties to the “real world” besides the personal devices we use to access it.

But, as we know from images of undersea cables that periodically go viral, the internet has a very real physical footprint. Those undersea cables run all over the world; joined end to end, they’d be long enough to reach the moon and back, and then to the moon again (with some more miles to spare).

The global cloud computing market is valued at $270 billion and powers countless applications, but unless you work directly with the tech, you may think of "the cloud" as an ethereal, hard-to-pin down buzzword. But just like the internet, the cloud’s ability to connect many remote machines virtually—and allow people located anywhere to collaborate together in real time—is powered by very tangible things like cables, servers, and data centers. And lots and lots of people.

So let’s bring things back down to Earth. In this guide, we’ll look at where the tech has been, how it works, and where it’s going. You’ll leave knowing how Gmail works, what Amazon Web Services actually does, and why industry leaders are talking about security concerns and environmental issues. We also interviewed executives at Google, Amazon, Microsoft, and IBM about the current state of the technology and what’s to come. Even if you’re coming in with a foggy understanding of cloud computing, this will help clear the skies.

I. Setting the scene

At its core, cloud computing is a way to virtually connect remote machines and people—and make the building blocks of internet tools a lot more accessible.

Before the cloud, many applications had to be downloaded on each individual user’s computer (and, often, paid for per machine). The user’s own computer would do all the work required to operate an application—and if the task involved a lot of processing power, and they didn’t have a computer powerful enough to perform that task, they were essentially out of luck. Now, the work required to operate many applications (think: code, data, processes) happens on a cloud provider’s servers, housed in its own data centers. Most of it is no longer local to your machine; instead, the cloud provider is responsible for the work (and the storage).

The industry is led by a Big Three of sorts: Amazon Web Services, Microsoft Azure, and Google Cloud. Also near the top of the list: Alibaba Cloud, China’s primary cloud provider. There are a suite of tertiary players, too: IBM, Salesforce, Tencent Cloud, Oracle, and the list goes on.

Servers, routers, and other network infrastructure (switches, wiring, etc.) housed in data centers are the physical components making the cloud work. Software is responsible for the rest—like in “virtualization,” the process by which a group of “virtual machines” (VMs), each with its own operating system, splits the computing workload and data storage.

Think of it this way: The industry is like Airbnb...for computing resources. Buying a house is an expensive, major commitment; you may not be sure how many rooms you need for how long, and what if you decide to change cities long-term? Buying your own servers is similar: expensive, complex, and energy-intensive.

By renting the amount of space you need in someone else’s house, you also don’t have to worry about roof repairs, lawn maintenance, gas bills, etc.—you just pay the Airbnb host a monthly, or tiered, rate. If you need more space, you can talk to them about renting another room; and if you don’t need the space anymore, the listing frees up for another guest. Paying a cloud provider to use its cloud infrastructure and data centers works the same way and has a similar appeal.

“It’s completely transformed industries because….It’s just like using electricity: You plug into a socket, and you just pay for what you use,” JG Chirapurath, Microsoft’s vice president of Azure Data, AI, and Edge, told us. “It took computing from being something you had to buy and stick in a cabinet or a data center somewhere—and paying for that power nonstop, whether you were using it or not—to something that was a utility.”

“The tech is interesting, but ultimately, we need people building things,” says Jeff Barr, vice president and “chief evangelist” at Amazon Web Services. “[The cloud is] a home improvement store, and we’re saying... ‘Here’s all your tools, and here’s your lumber and your metal, and your nails, screws, bolts, and brackets….Take these things and put them together in really amazing ways to solve problems for people.’”

III. How it all works

Remember those undersea cables we mentioned earlier? Their job is to shepherd data back and forth between the 7+ million data centers worldwide, powering cloud computing and the internet as we know it today.

Inside those data centers live the computing, storage, and networking equipment necessary for the cloud to function. Servers provide the processing power for applications to run; storage devices store data; and routers, switches, firewalls, and more help different devices share information between each other or, alternatively, prevent too much info from being shared. Then there’s the additional infrastructure, such as fiber-optic cables to connect everything, sensors to monitor device temperatures, and water pipes to cool down servers.

There are three main types of clouds (and we’re not talking about cumulus, stratus, and cirrus). It all comes down to how they’re hosted: public, private, or a hybrid of the two approaches.

For public cloud providers like Google, Amazon, Microsoft, and more, resources—and the tech’s underlying infrastructure—are shared by hundreds of millions of people.

Software as a Service

SaaS is the type of cloud-based service that you as a consumer probably have the most day-to-day experience with. These are direct-to-consumer products, although in some cases, a company pays for its employees’ access. The cloud provider offers access to an application or database, which you can use via web browser or dedicated platform. Subscription fees are common here. As the end user, you don’t have to deal with managing or maintaining any of the infrastructure—like servers, network, or operating system—and you can access the software from anywhere. Behind the scenes, “load balancers” analyze the application’s total workload, then figure out how best to distribute it across virtual machines to minimize cost and maximize resources.

Just as the internet itself transformed virtually every industry, cloud computing has done the same. Its contributions include web-based email, real-time collaboration tools, and a lower barrier of access for creating any new application.

Based on conversations with industry leaders, our research, and personal experiences, we chose eight examples of industries that have been changed by cloud computing.

Any industry that relies on real-time analytics and data accessibility has been reshaped by cloud computing, and investing is at the forefront. Computerized trading terminals, which analysts used to request stock quotes, were first introduced in the 1960s—but they were expensive and operated independently. Now, cloud computing allows traders to access market data from any computer, check for updates, and buy or sell shares.

It’s 2021: Do you know where your data is? In the cloud computing community right now, as far as discussion topics go, security and the changing regulations around consumer data, in particular, have top billing.

Location matters: As the worldwide push for data privacy intensifies, the conversation about data sovereignty does, too. Data sovereignty is the idea that data is subject to the laws and regulations of whichever nation collects it, not necessarily the laws of the one from which it originates.

“A few of the top questions that we’ll receive from customers are, ‘Where is my data?’, ‘How do I put controls in place for who’s accessing what types of data?’, and ‘How do I maintain control?’” says Will Grannis, founder and leader of Google Cloud's CTO Office. “So this concept of digital sovereignty is actually becoming a predominant architectural pattern, starting in Europe, which makes sense given recent regulatory, national-level discussions.”

Grannis predicts that in the future, cloud providers will need to give customers the ability to control access to and physical storage location of their data. Microsoft is juggling that now, after recently announcing an “EU Data Boundary” plan.

Where regulation fits in: In the face of increased regulatory pressure from governments (think: GDPR), cloud providers are working on advanced validation and data processing tools to create “digital trails” of sorts, which can help them address security rules and regulations.

Public vs. private: Another key part of the security conversation? Some believe public clouds are safer, while some would prefer to place their trust in private clouds.

A 2020 survey of 750 cloud “decision makers” at small, medium, and large companies found that 78% use a hybrid cloud strategy. And while personalization is in, one-size-fits-all seems to be out: Only 20% reported using solely a public cloud—and just 2% opted entirely for a private cloud.

Mark Schwartz, enterprise strategist at AWS, falls squarely in the former camp. He says the public cloud tends to offer more security features more quickly—“it takes time for them to be certified for use in a classified environment”—and that the service’s settings naturally enforce good security practices and encryption at all times. Highly sensitive organizations like the US Department of Homeland Security, as well as some banks and healthcare companies, opt for the public cloud, he says.

But the CIA uses a private cloud from AWS—and the agency’s CIO has called it the “best decision we've ever made." To some, the very idea of the public cloud is nerve-wracking—billions of users storing their data with one overarching organization, especially one that cybercriminals may view as a worthy target.

Today, the cloud community at large—including industry leaders, startup founders, and independent developers—is grappling with a number of other key conversations about the tech’s future. Those issues range from solidifying how “personalized” the cloud can get to addressing its gigantic carbon footprint.

The public-vs.-private debate is part of why some experts predict we’ll increasingly move toward hybridization and multicloud.

Quick recap: Hybridization is the combined use of public and private clouds for different types of data. A multicloud approach is when a customer chooses different computing and storage features from different clouds—even, for instance, competing ones like AWS and Azure—and runs them all in the same architecture.

Look at any bar chart tracking cloud market growth from the late 2000s to now, and it’ll resemble a staircase. And there’s no sign the climb will stop anytime soon.

Pulse check: The public cloud market alone is expected to grow to $332 billion worldwide by the end of this year, up from $270 billion in 2020, according to Gartner estimates. Tech giants’ quarterly earnings reports can shed light on why: In 2020, Google Cloud accounted for 15% of Google’s total operating income, and for Microsoft, its cloud services and server products accounted for 35%. But Amazon takes the cake: The company had AWS to thank for two-thirds of its operating income last year.

Looking ahead: Cloud infrastructure is the relatively unglamorous tech that powers the sexier emerging technologies.

“We’ve barely begun to exploit the potential of the cloud,” says AWS’s Schwartz. He compares it to the advent of electricity in people’s homes, how wall outlets invited countless opportunities for innovation in the form of appliances.

“This ability to access electricity that way opened up the floodgates of creativity,” he says. “Now, you can so easily access whatever infrastructure you need—whatever advanced services, emerging technologies you need—and access it just as if you're plugging into the wall.” Over the next five years, he predicts, we’ll see that “huge surge in creativity.”

Stay up to date on emerging tech

Drones, automation, AI, and more. The technologies that will shape the future of business, all in one newsletter.